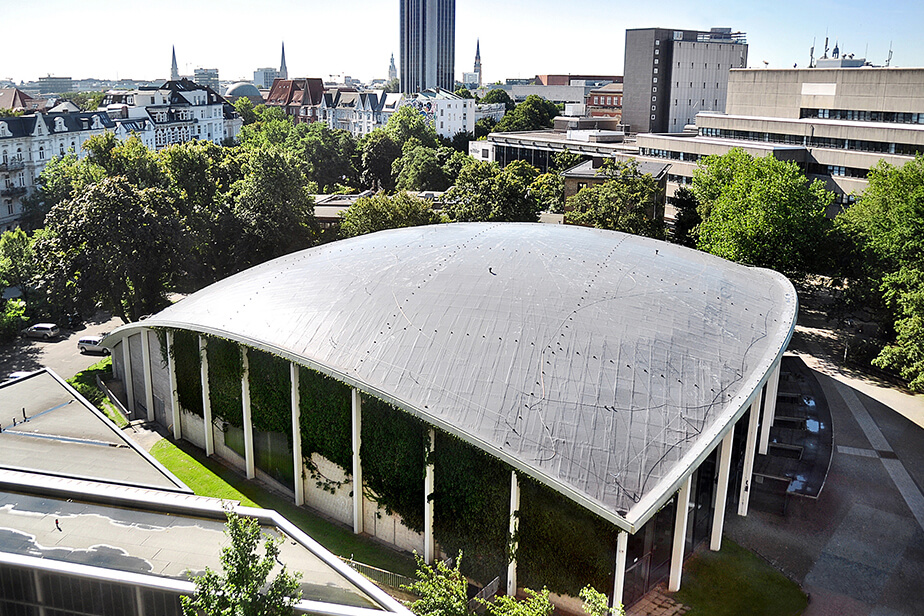 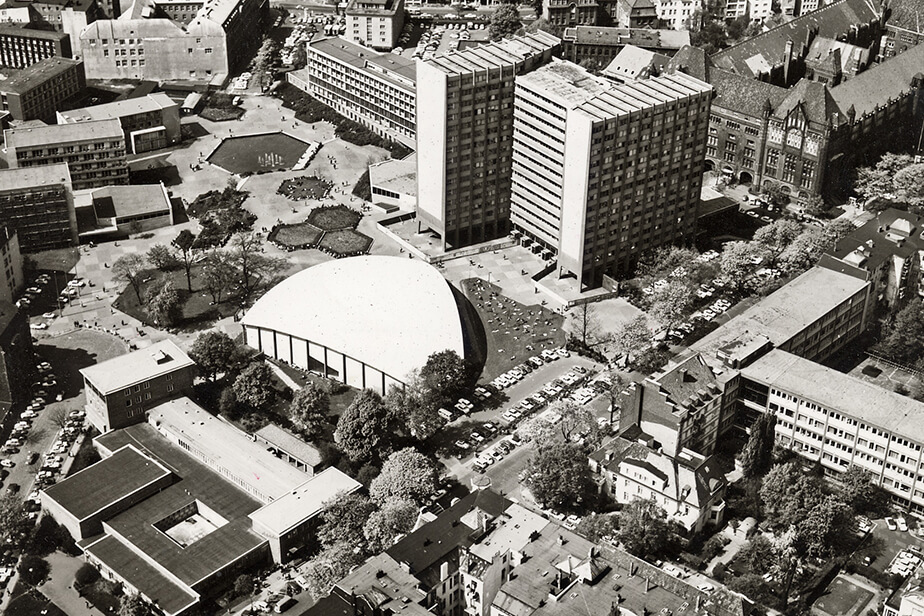 Arbeitsstelle für Universitätsgeschichte
The Von-Melle-Park Campus was designed in its present-day form in the 1960s, with several buildings, such as the Audimax or Philosophenturm, in a characteristically post-war modernist style, and some others in the Brutalist (béton brut, or “exposed concrete”) style, such as the building at Von-Melle-Park 5 (WiWi Bunker). 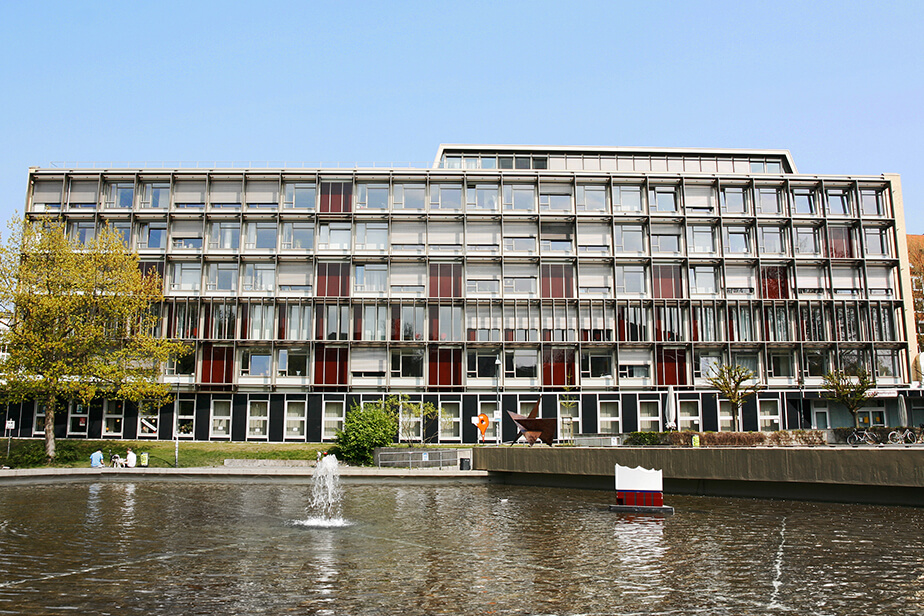 UHH/Baumann
A view across the duck pond of the Faculty of Education building (VMP8). 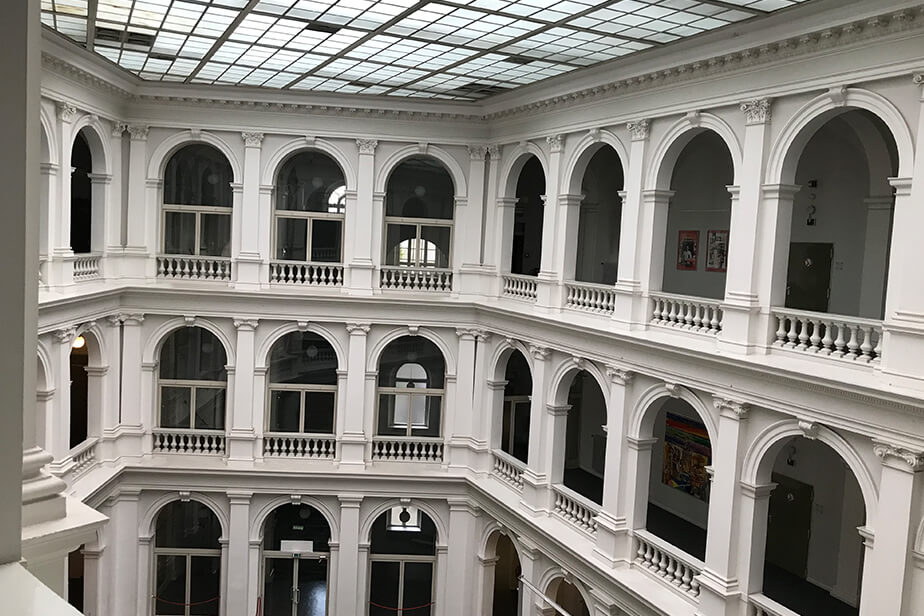 UHH/Möller
The atrium in the old building of the State and University Library Carl von Ossietzky (VMP3).

A University campus in the heart of the city

After the University reopened following the Second World War, the number of students increased rapidly. In the first post-war semester, 3,501 students enrolled; at the dawn of the 1960s, this number had risen to nearly 13,000. For this reason, Hamburg initiated a huge construction program at the end of the 1950s that led to the development of Von-Melle-Park and its most emblematic buildings, the Audimax and the Philosophenturm. Today, Von-Melle-Park forms the main University campus.

Bombing during World War II almost completely wiped out the area between Edmund-Siemers-Allee, Grindelallee, and Bornplatz. Only the Pferdestall and the Main Building remained standing. 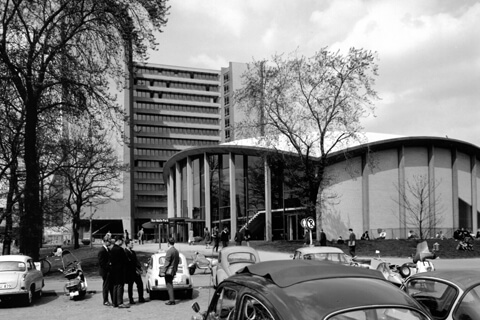 Arbeitsstelle für Universitätsgeschichte
The Audimax was completed in 1959 by Bernhard Hermkes—he was also the architect for the Grindel high-rise complex and the Kennedy Bridge.

The first new building on the Von-Melle-Park Campus was a dormitory and cafeteria on Schlüterstraße. It was completed in 1953.

At 52 meters, the Philosophenturm is the tallest building on the Von-Melle-Park Campus. It was built between 1958 and 1962. Several more buildings were erected starting in the mid-1970s, including the WiWi Bunker at Von-Melle-Park 5, which houses the business, economics, and social sciences departments, and the State and University Library Carl von Ossietzky at Von-Melle-Park 3. 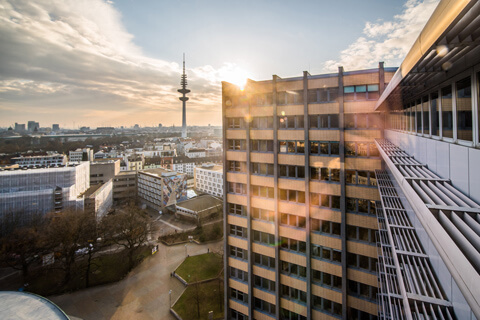 UHH/Dingler
Like many other campus buildings, the Philosophenturm was constructed under the leadership of Paul Seitz—at the time the head of Hamburg’s public construction authority.

Post-war modernism characterizes the Main Campus, featuring glass, steel, and concrete. The idea behind the design was to create a sense of flow. A few buildings also include elements of Brutalism (from the Frenchbéton brut, raw concrete). This was the predominant style of construction from the 1950s to the 1980s. Typically, the style is characterized by exposing the dominant construction material, concrete, as well as the construction design itself. The goal was to pay court to modernism and ensure “honesty” in expression. The WiWi Bunker at Von-Melle-Park 5 was built in this style. 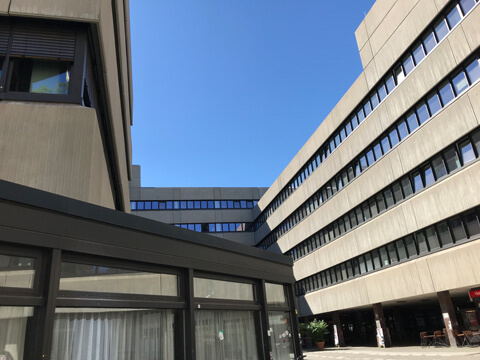 Keep your eyes open as you go—you’ll discover a lot of art on campus! Where did it come from? When the new, large University buildings went up, there was already a program underway to promote the public display of art. In the 1960s and 70s, a competition was held and the winning sculptures, fountains, and reliefs began to decorate the Main Campus. 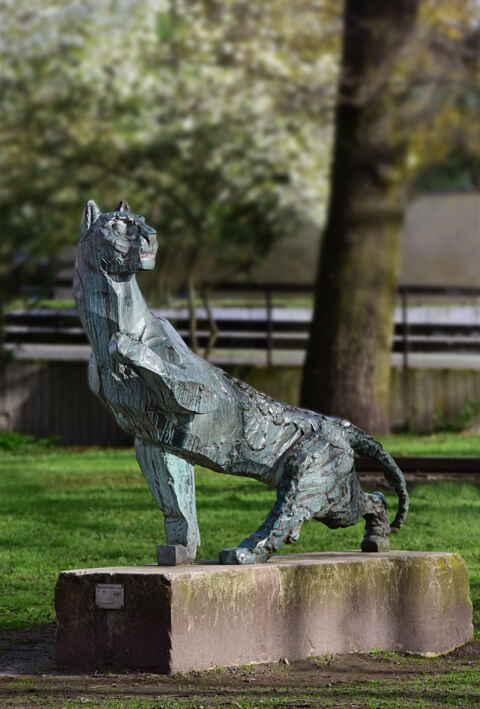 UHH/Karin Plessing/Reinhard Scheiblich
Here is one example of artwork on the Main Campus: The Panther, a bronze statue by Hans Martin Ruwoldt. The figure dates from 1965 and is located between the WiWi Bunker and the Audimax.