The development of increasingly powerful telescopes in recent centuries has enabled astronomers to look ever deeper into the universe. At the same time, new theories in the field of physics have helped us to better understand the complex processes in our cosmos. Starting from our cosmic home, Planet Earth, and our solar system, we have learned more and more about the Milky Way with its hundreds of billions of stars and about the world of galaxies stretching all the way to the edge of the universe.
A journey into the cosmos is also a journey back in time. Therefore, our telescopes enable us to explore the 13.8-billion-year history of our universe. The cosmic background radiation on the edge of the visible universe bears witness to a time when the universe was just 380,000 years old. Behind lies the world of elementary particles and gravitational waves formed shortly after the Big Bang.

Time and space, space and time

Do you know that you use Einstein's theory of relativity every time you make an appointment? And have you ever asked yourself what time actually is?

Time started its existence at the Big Bang – it didn't exist before that. Since Einstein's theory of relativity, it has been considered one of four equal parts of our physical model for describing the universe: the three spatial dimensions and time, which the theory of relativity links to form "space-time". In everyday life, the two concepts may feel like two completely different categories, but Einstein explains their connection with a simple example: if two people want to meet, you don’t just to agree on a meeting place or just on a meeting time. You need both to really be at the same place at the same time.

But time is also a hard nut to crack mentally. It has been ticking continuously and relentlessly since the proverbial beginning of time. However, it always runs in one direction only, namely forwards, never backwards. And it doesn't even do this evenly everywhere – the faster something moves, the slower time runs there. The effect is minimal, but measurable.

(Written text to read along can be found below the video)

Our active sun – not in midlife crisis yet

Our own star, the Sun, is currently experiencing its calmest phase as it approaches the mid-way point of its 11-billion-year life. When it was formed, roughly 4.6 billion years ago, it emitted significantly more life-threatening ultraviolet radiation than today. Towards the end of its lifetime, about 6 billion years from now, it will grow into a giant star and swallow up the planets of the inner solar system. However, during its time as a small, average star the Sun has afforded life on Earth a good and relatively long period of time to flourish.

Earth above the lunar horizon

It is only in recent decades that we have been able to view the Earth in all its isolated beauty from afar. Orbiting 134 km above the surface of the Moon, the Lunar Reconnaissance Orbiter recorded these images of the Earth setting behind the Moon.

Life on Earth, which has existed for over 3.5 billion years, is dictated by the development of the Sun. It will take another billion years until the increasingly ferocious Sun brings life on Earth to a fiery end.

The creation of stars in the Eagle Nebula

Stars are formed in huge clouds of gas and dust which contract as a result of gravitational forces and separate into smaller fragments. In the densest parts, protostars collapse and heat up. In a final step, hydrogen is transformed into helium through nuclear fusion. This is the star’s main source of energy. Stars are normally formed within dense clouds of dust such as the Pillars of Creation inside the Eagle Nebula.

Stars are not born alone. Instead, thousands of them are created from clouds of gas and dust. The young star cluster NGC 3293, which is only 10 million years old, still contains remains of the original gas and dust cloud from which it emerged. Although these “star siblings” were born at the same time, they have very different masses. Heavy stars with a short lifespan are born together with smaller stars, such as our Sun, with a longer life expectancy.

Star clusters dissolve slowly as they rotate around the centre of the Milky Way. The star cluster M7, which is around 200 million years old, has already completed one full orbit of the Milky Way and is approaching the end of its cosmic life. Soon its stars will break away and start their own journeys.

Our Sun was also part of a star cluster 4.6 billion years ago. The Gaia space observatory is currently searching for stars of exactly the same age and chemical composition as our Sun. Who knows, maybe it will one day be possible to detect other “siblings” of the Sun?

Eta Carina – where stars are born

Approximately 7,500 light years from the Earth there is one of the most active areas of the Milky Way for the birth of new stars. Some remain hidden deep in the dust clouds from which they will one day emerge; other, heavier stars have already blown their surroundings free and shine out from young star clusters.

Nothing lasts forever – not even stars. Once the supply of hydrogen inside the star runs out, its life can be extended a little by creating heavy chemical elements. However, sooner or later the star becomes unstable, swells, begins to pulsate and releases most of its mass to its surrounding environment. The next generation of star systems can then emerge from this enriched matter. Endings and new beginnings are thus closely linked in the cosmic matter cycle.

Beautiful planetary nebulae, such as Messier 57 shown here, burn bright for a short time and then die within a few ten thousands of years. What remains is a slowly cooling white dwarf.

The most spectacular way a star can die is by exploding as a supernova. In the year 1054 a supernova shone for several weeks with the same brightness as all the stars in our Milky Way combined. The magnificent explosion cloud Messier 1 is a surviving witness to this event. Only certain double star systems and stars which are much heavier than our Sun finish their lives as supernovas. In the end, all that is left of them is an ultra-dense neutron star or even a black hole.

Galaxies are medium-sized building blocks of our universe. They often comprise many hundreds of billions of stars and can be found in different forms. Like the Milky Way, Messier 83 is a barred spiral galaxy. Photographs show only luminous matter such as stars, gas and dust clouds. A large proportion of the galaxy matter is invisible – the so-called "dark matter".

Galaxies are not isolated entities, some can get rather close to each other. The two galaxies NGC 4038 and 4039 are currently passing through each other. The stars themselves are so far apart that they do not collide, but in the dense clouds of gas and dust many stars are formed. Eventually the two spiral galaxies will fuse and form one huge elliptical galaxy.

Galaxy clusters are the largest building blocks in the universe. Collections of hundreds or even thousands of galaxies surrounded by vast amounts of dark matter.

Objects with a heavy mass can deflect light. Mass-rich galaxies such as MACSJ0717 can concentrate light emitted by objects behind them and, therefore, serve as an optical lens. These “gravitational lenses” make it possible for us to see far-away galaxies whose light takes 12 billion years to reach us. The extended curves and lines on this telescope picture are highly magnified and distorted images of such galaxies. This gives us the unique chance to look deep into the universe and learn more about the early period of its existence.

Gazing deep into the past

As we look further and further into the universe with our telescopes, we are able to gaze further and further into the past. One of the deepest looks back in time is the Hubble Ultra Deep Field – an image exposure lasting almost 12 days of a small region of space recorded by the Hubble telescope. The small red dots are some of the most distant galaxies ever seen. They were formed 800 million years after the Big Bang. Their light has travelled for around 13 billion years to reach us. Before these first stars and galaxies were formed, the universe lay in darkness for hundreds of millions of years.

There is an interesting article by ESA on the Gaia catalogue.

If you are interested in the movement of the stars in our sky, read more here. 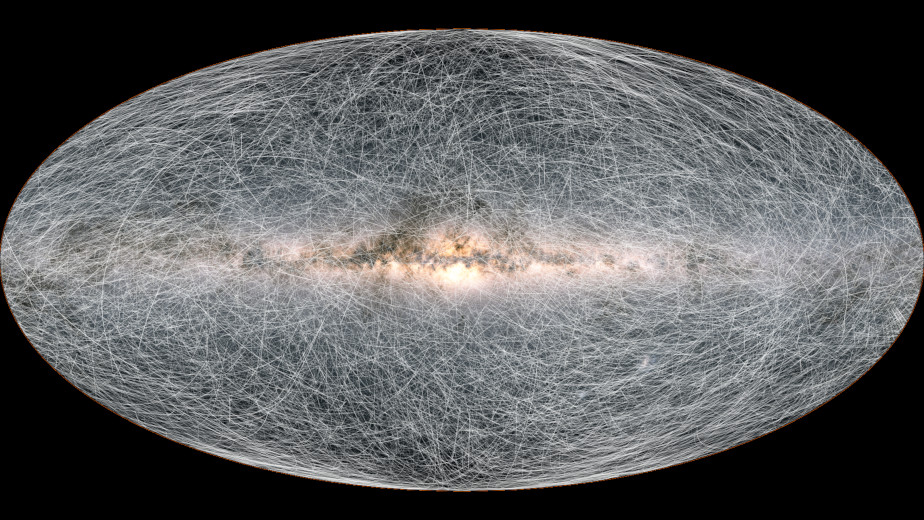 ESA/Gaia/DPAC
The trails on this image show the displacement of stars on the sky 400 thousand years into the future.

The main aim when developing a new telescope is to increase its capacity to collect light. This makes it possible to see very faint celestial objects and to take very clear pictures. The Very Large Telescope operated by the European Southern Observatory ESO in the Atacama Desert in Chile is currently the most impressive example of such a telescope. It has four mirrors, each of which measures eight meters in diameter. From around 2027 the European Extremely Large Telescope, with a 39-metre mirror, will be able to see even further into the cosmos. 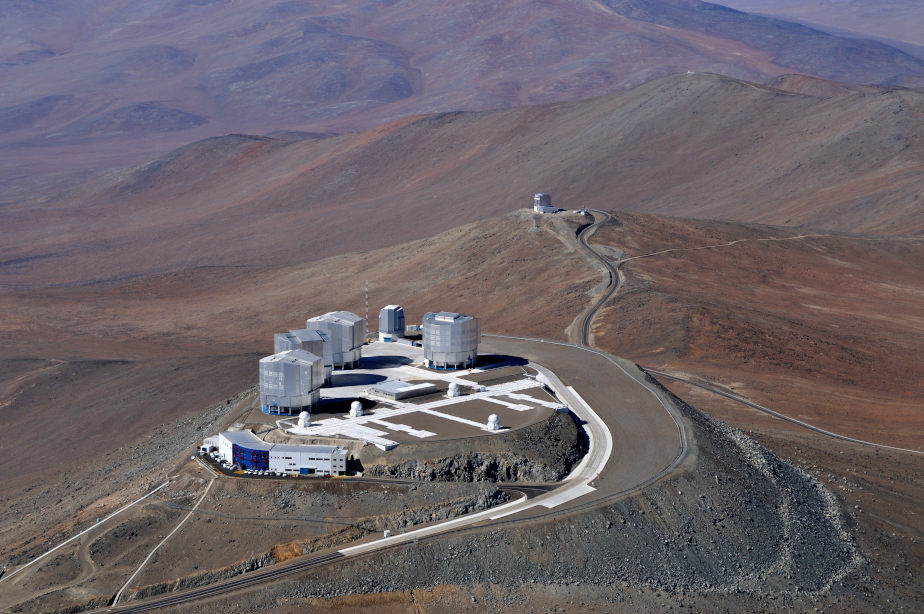 Outside Earth’s disruptive atmosphere, at an altitude of around 560 km, the Hubble space telescope orbits our planet. With its mirror measuring 2.5 metres in diameter, it has for the past three decades provided us with the deepest and clearest insights into the universe. Although Hubble is only one of several space telescopes, many of its images have become iconic in astronomy. A new generation of space telescopes took over this year: the James Webb Space Telescope. 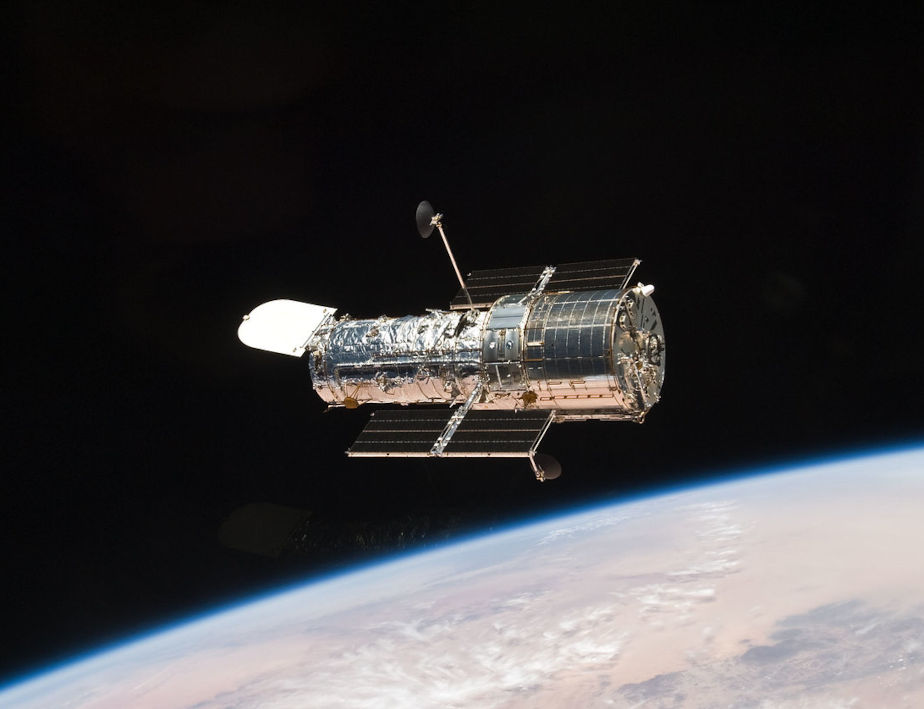 The Planck space telescope measures cosmic background radiation more accurately than any instrument before. It was launched in 2009. In order to detect the extremely weak signals sent from the early period of the universe, all other sources of radiation – such as stars, gas and dust clouds, and galaxies – must be eliminated. The remaining data can then be used to calculate the age of the universe and changes in the speed at which it is expanding. These data also provide us with information on the density of visible and dark matter, as well as dark energy. 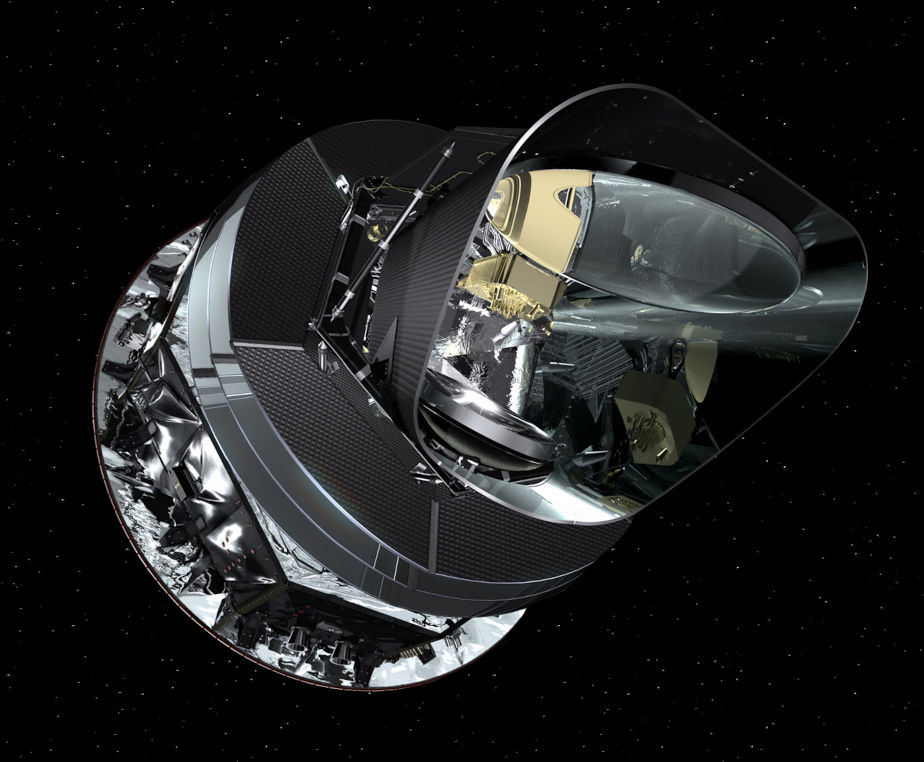 One and a half million kilometers from Earth, a new super telescope has been peering into the depths of the universe since 2022, sending spectacular images of nebulae, galaxies, galaxy clusters and more back to Earth. The James Webb Space Telescope is a joint project of NASA, the European Space Agency (ESA) and the Canadian Space Agency (CSA). It will provide an even deeper look at our origins than its Hubble predecessor, from the formation of stars and planets to the birth of the first galaxies in the early universe. 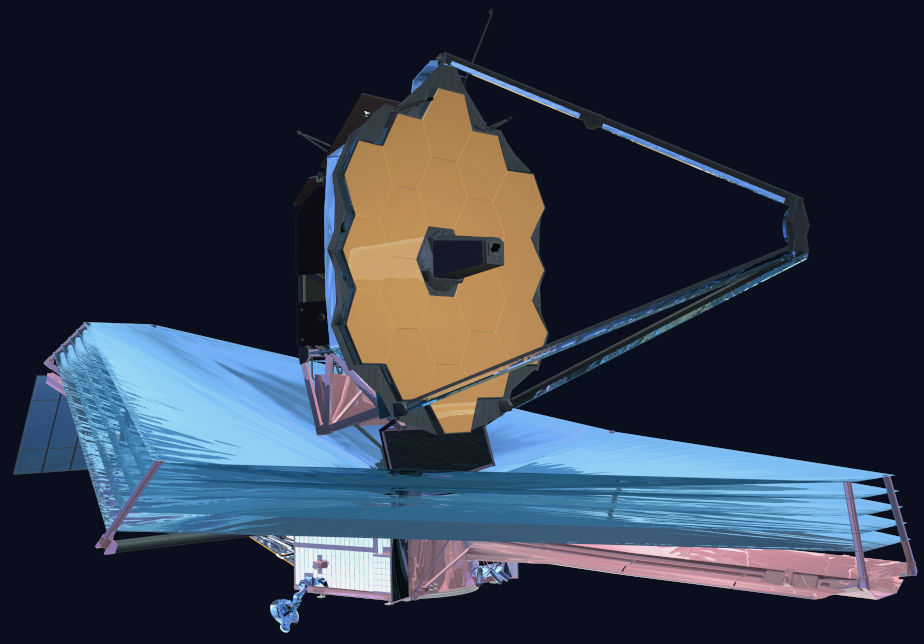 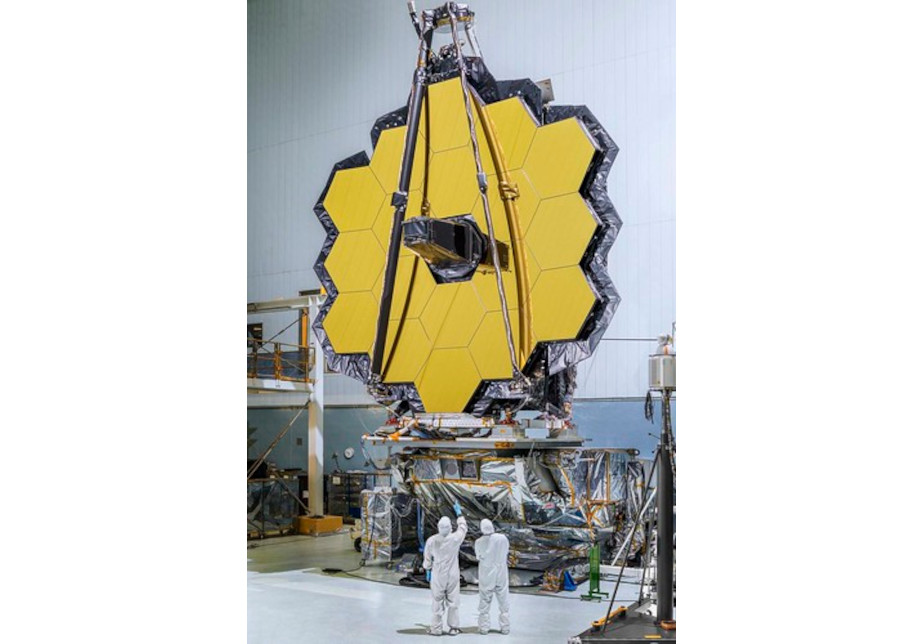 Why did we shoot another, even bigger telescope into space earlier this year? Why do we need a James Webb telescope if we already have Hubble?

Read more about how these two telescopes compare in an article by NASA.

We know only five percent of the universe 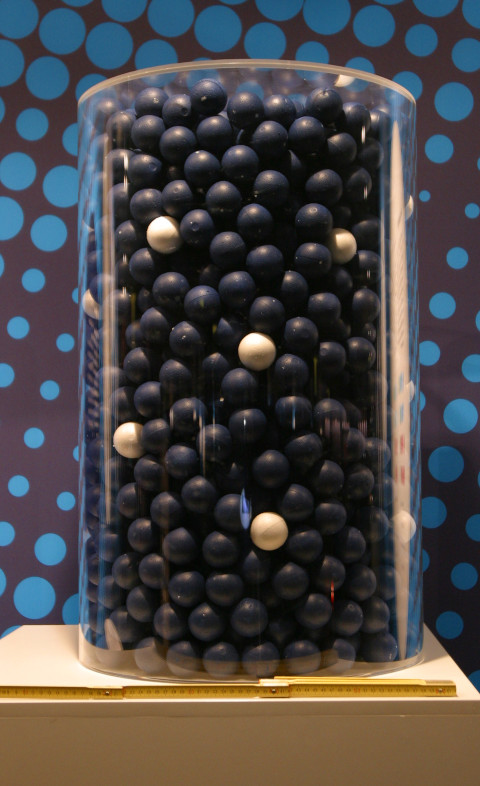 Leihgabe / Loan from: DESY Zeuthen
Guess what percentage of these spheres are white...? Everything we see in the universe is made of ordinary particles, or matter. However, this matter (the white spheres) makes up just under five percent of the universe. It is assumed that the large remainder consists of dark matter and dark energy (the dark spheres). So far, no one has been able to detect and study them.

Glimpses into the universe

Take a look back in time with our image gallery of galaxies, nebulae and star clusters... 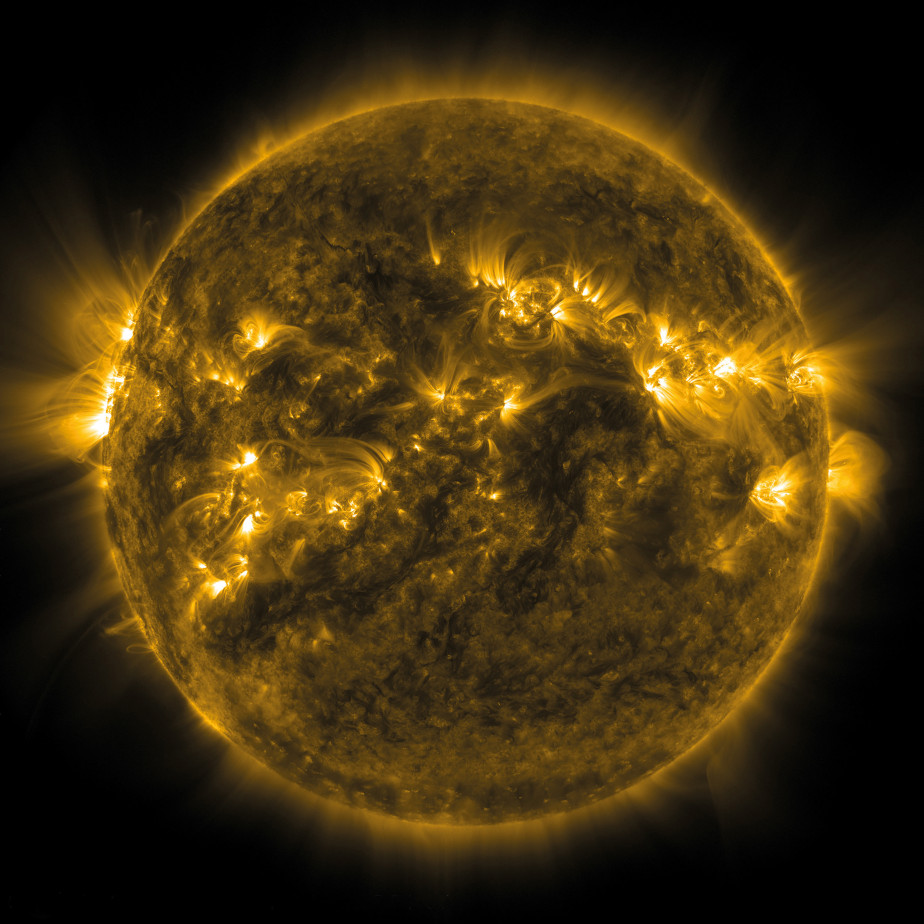 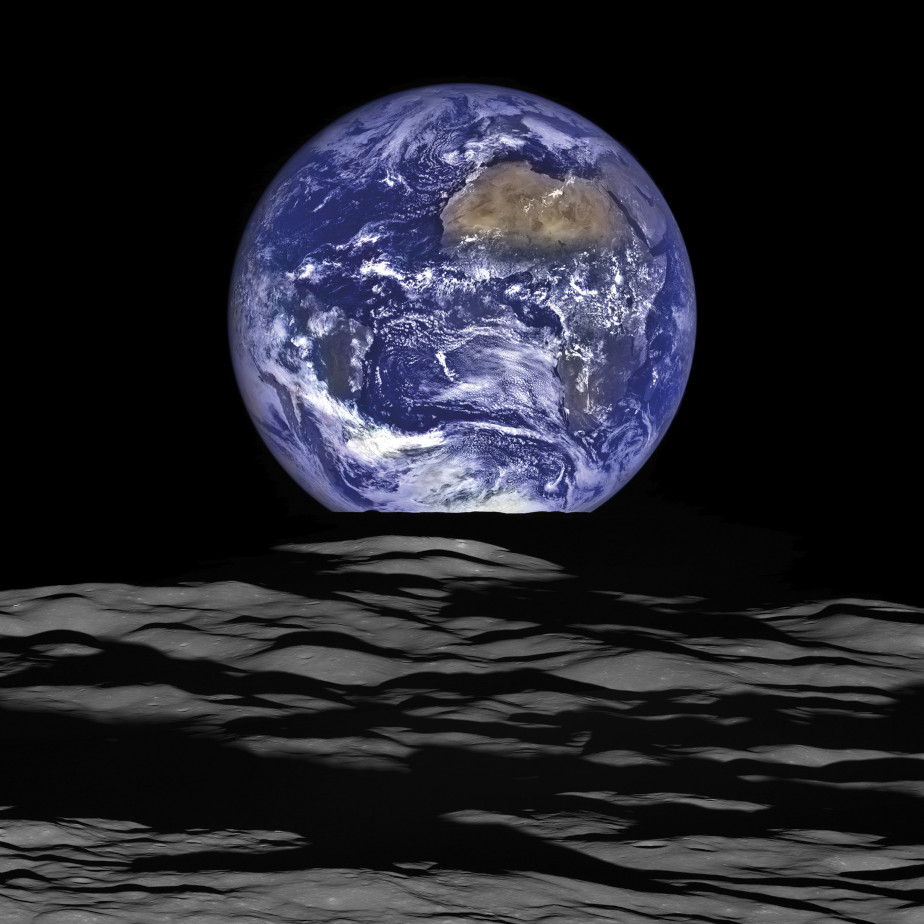 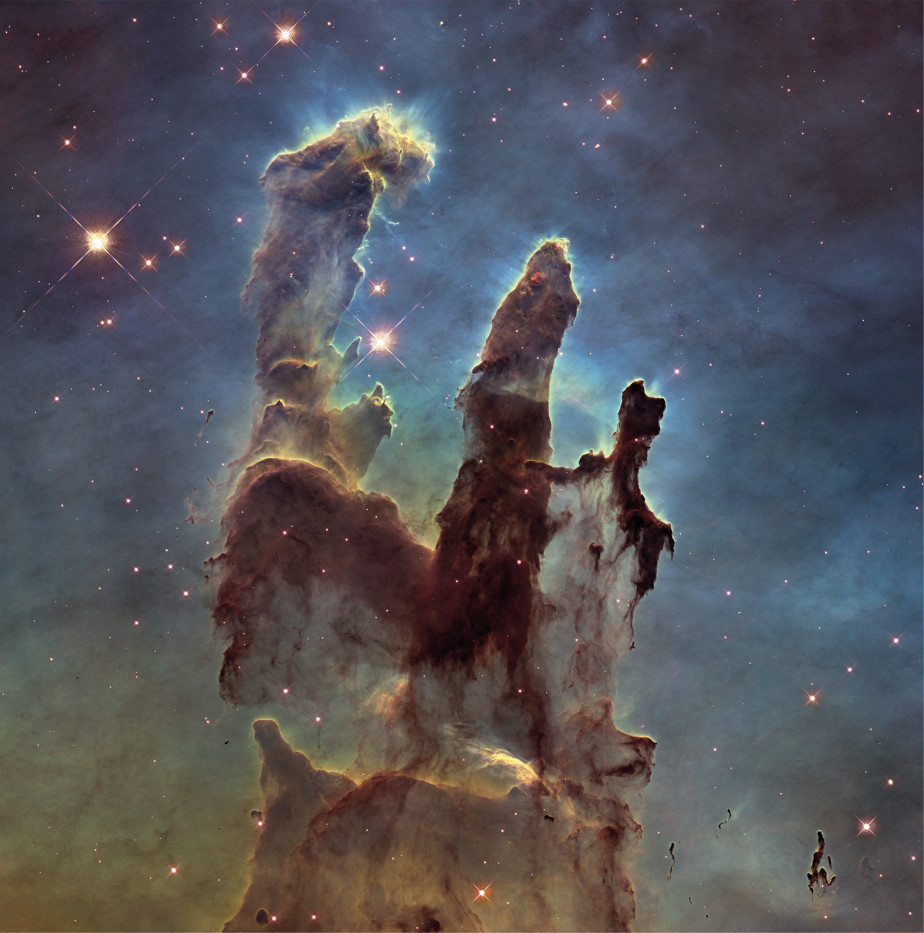 NASA, ESA
The creation of stars in the Eagle Nebula 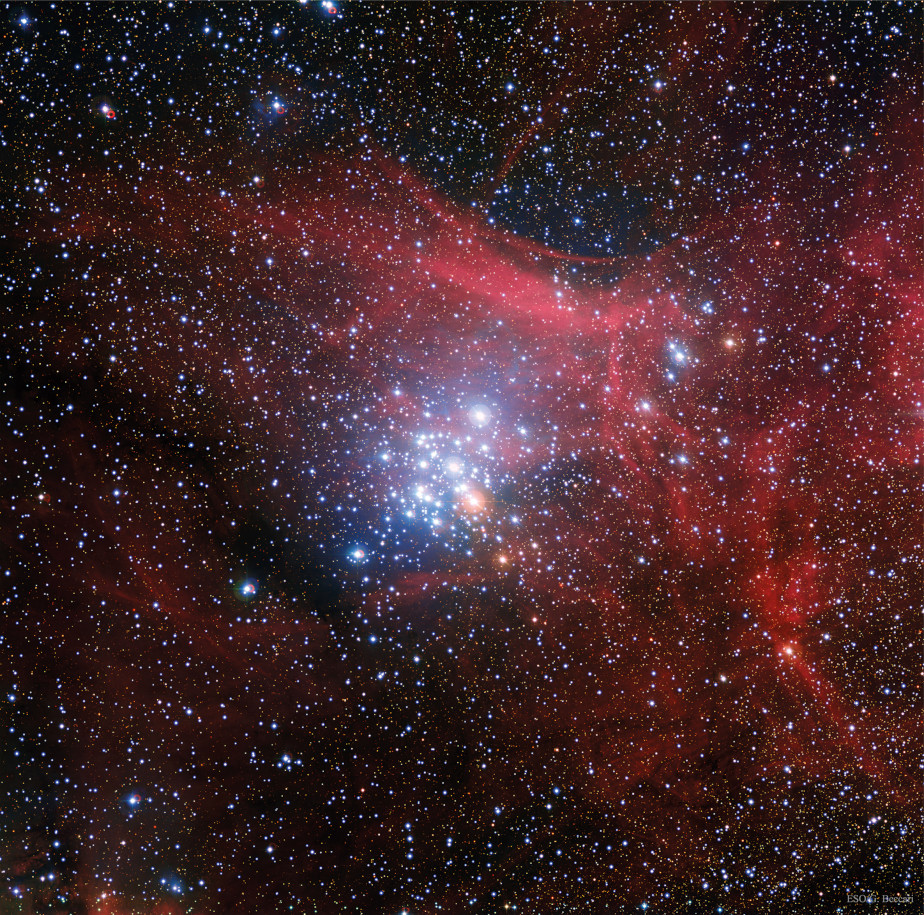 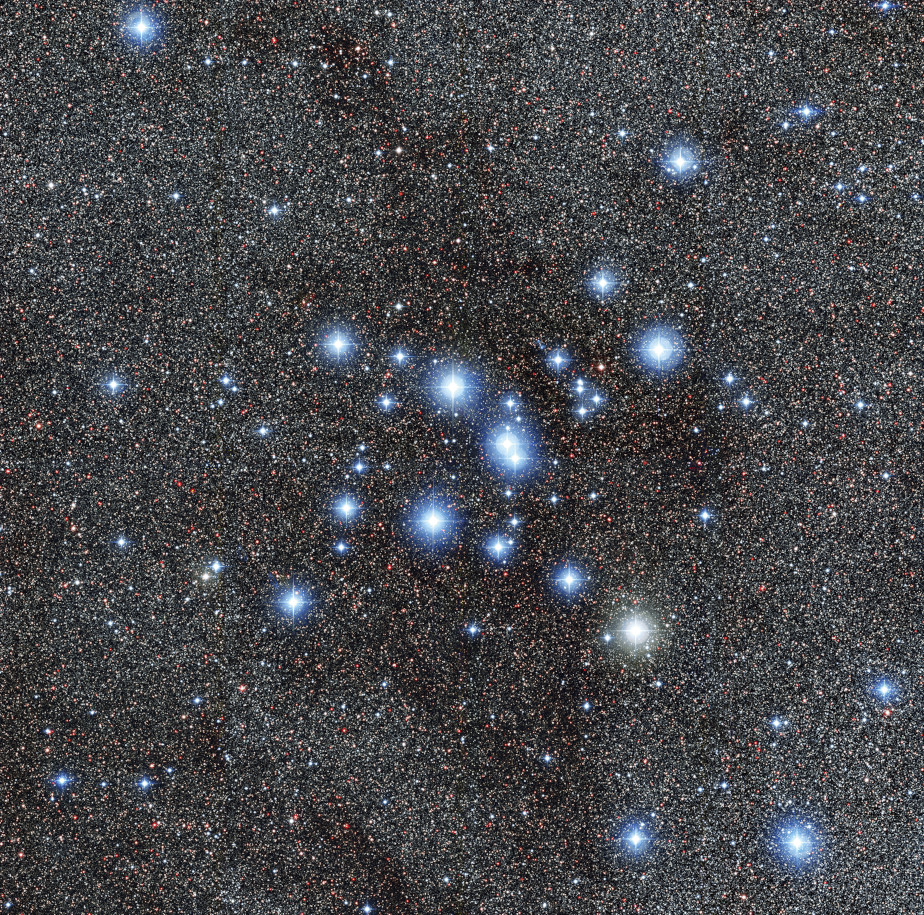 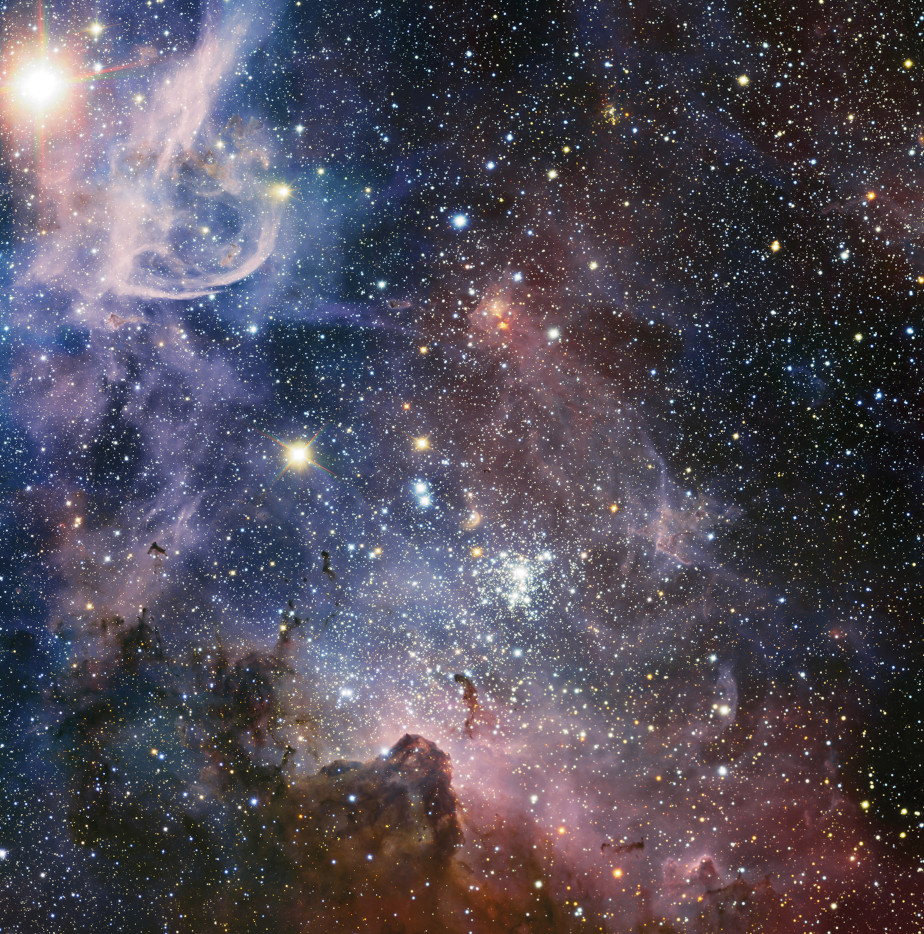 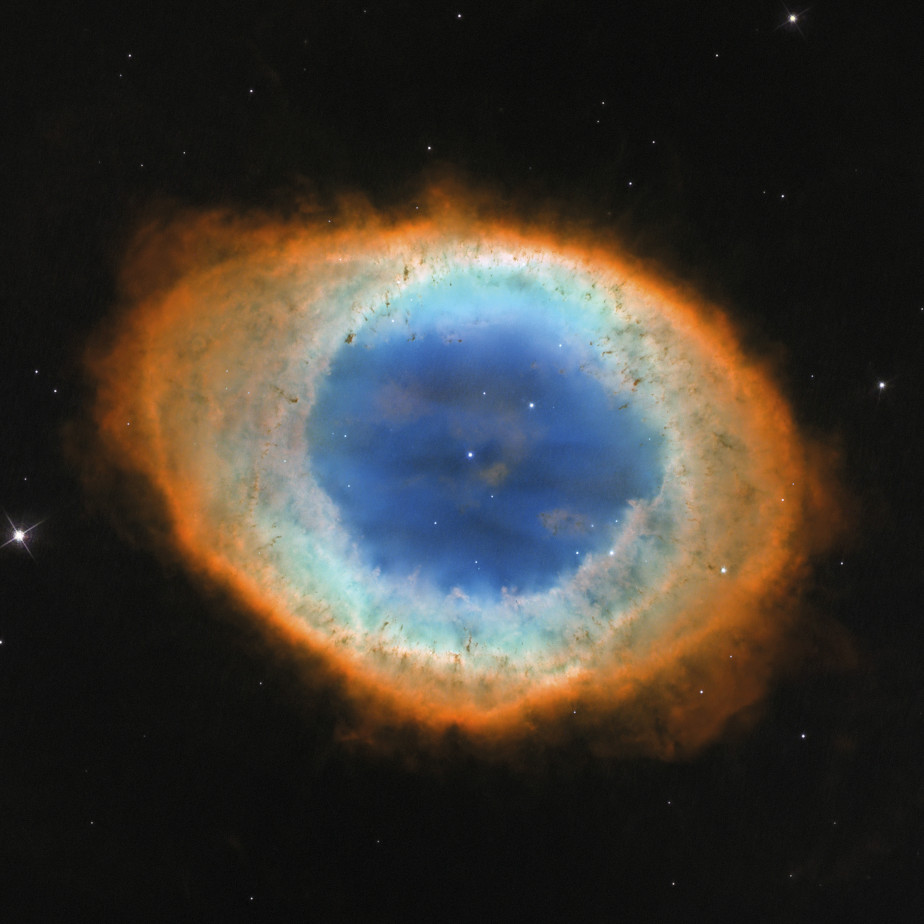 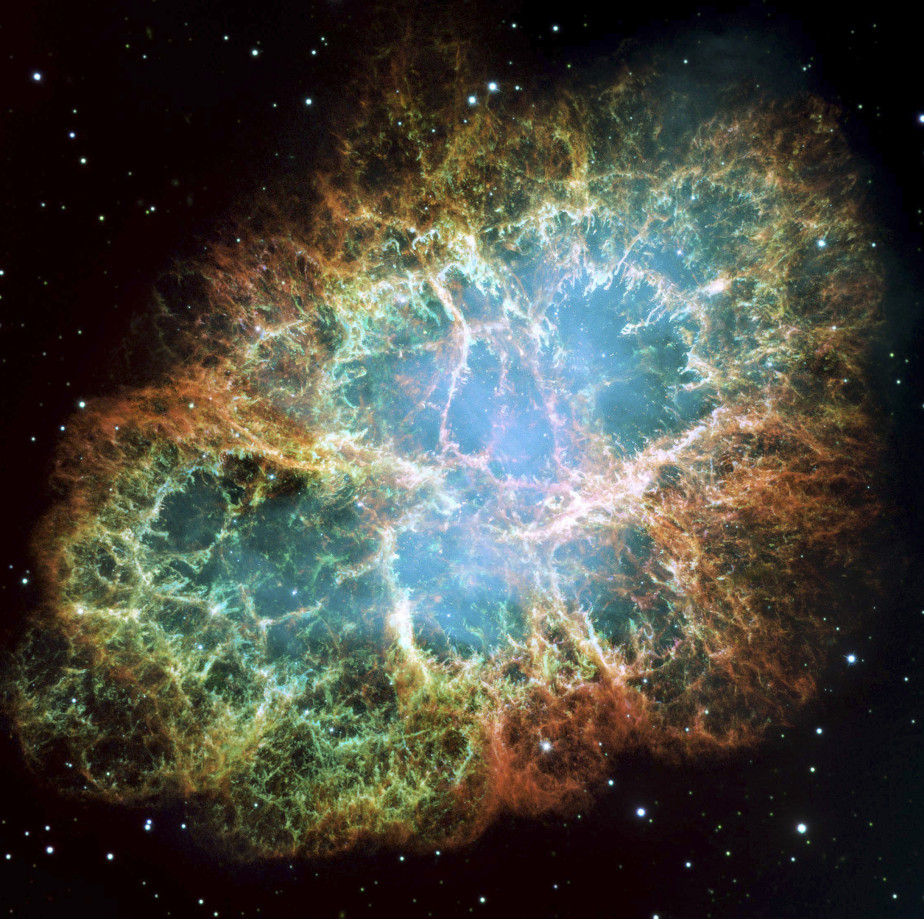 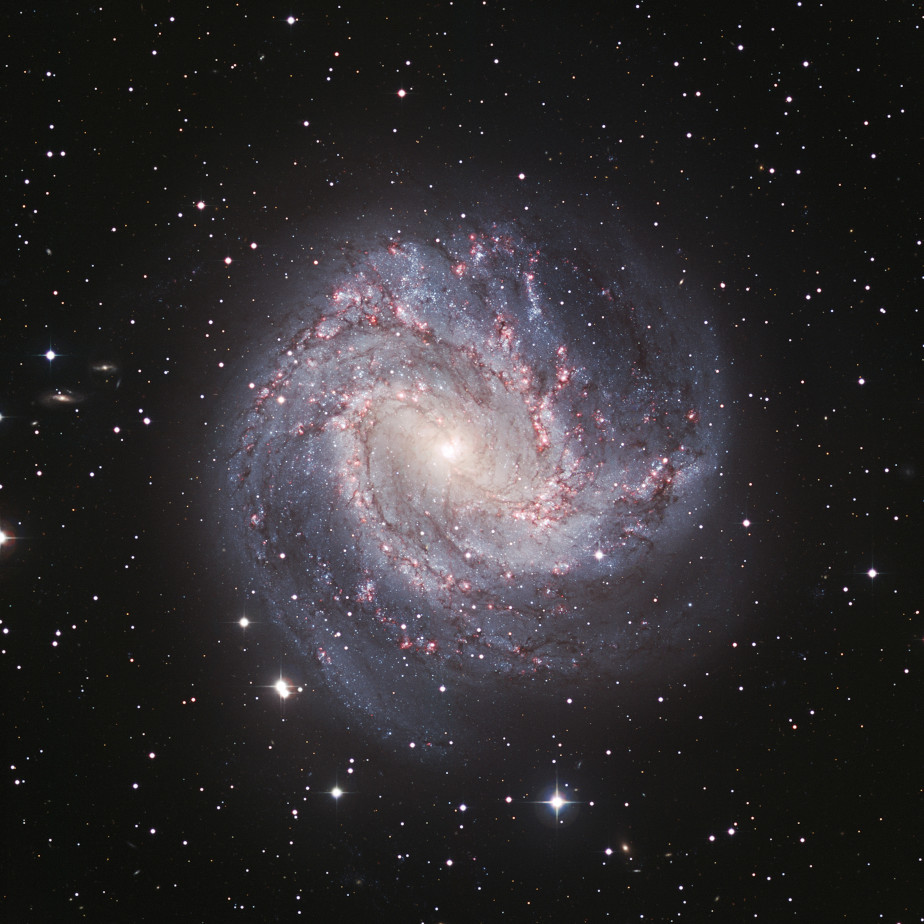 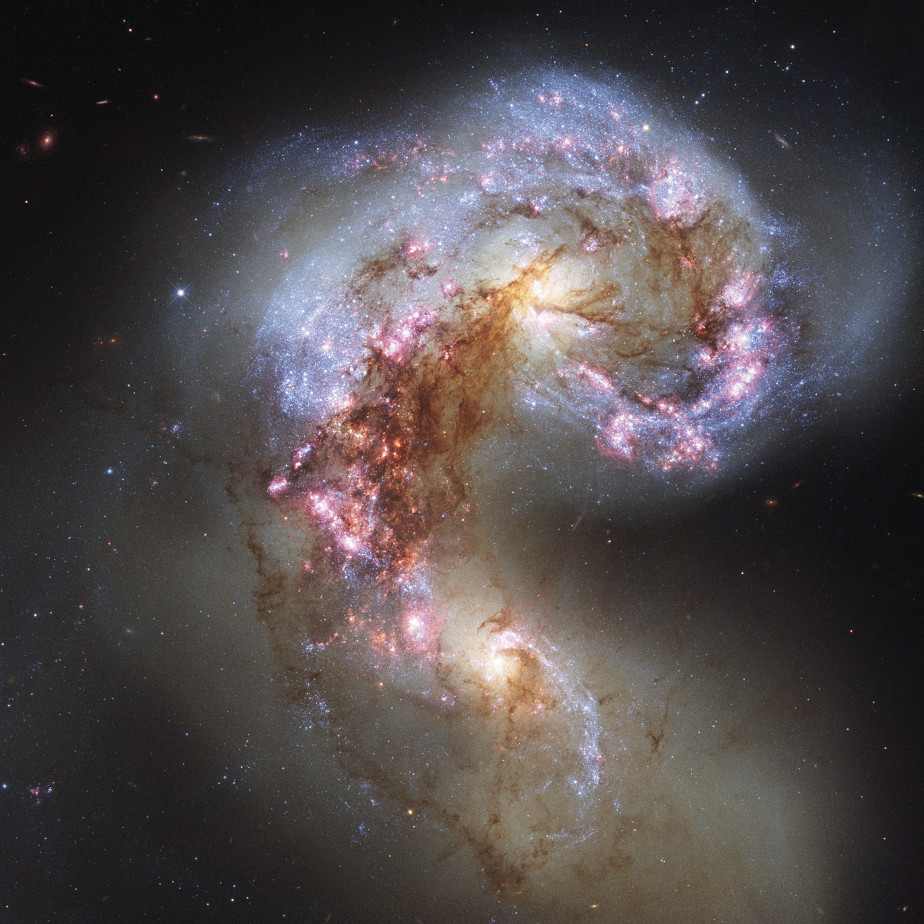 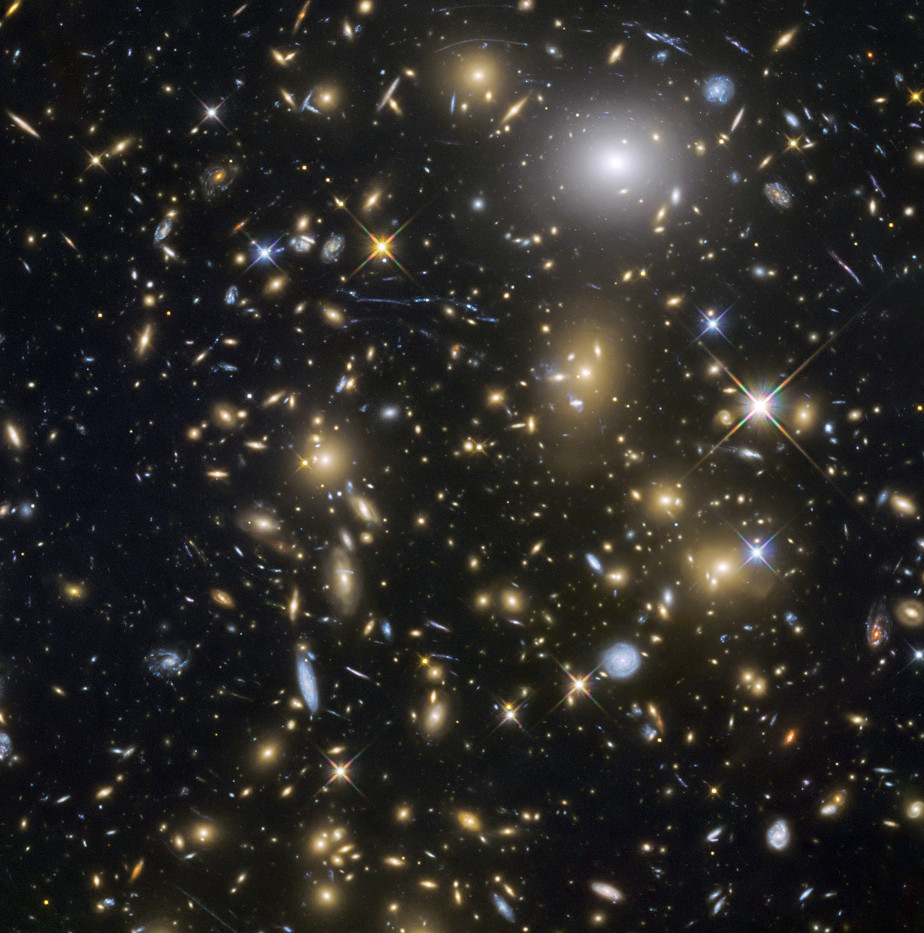 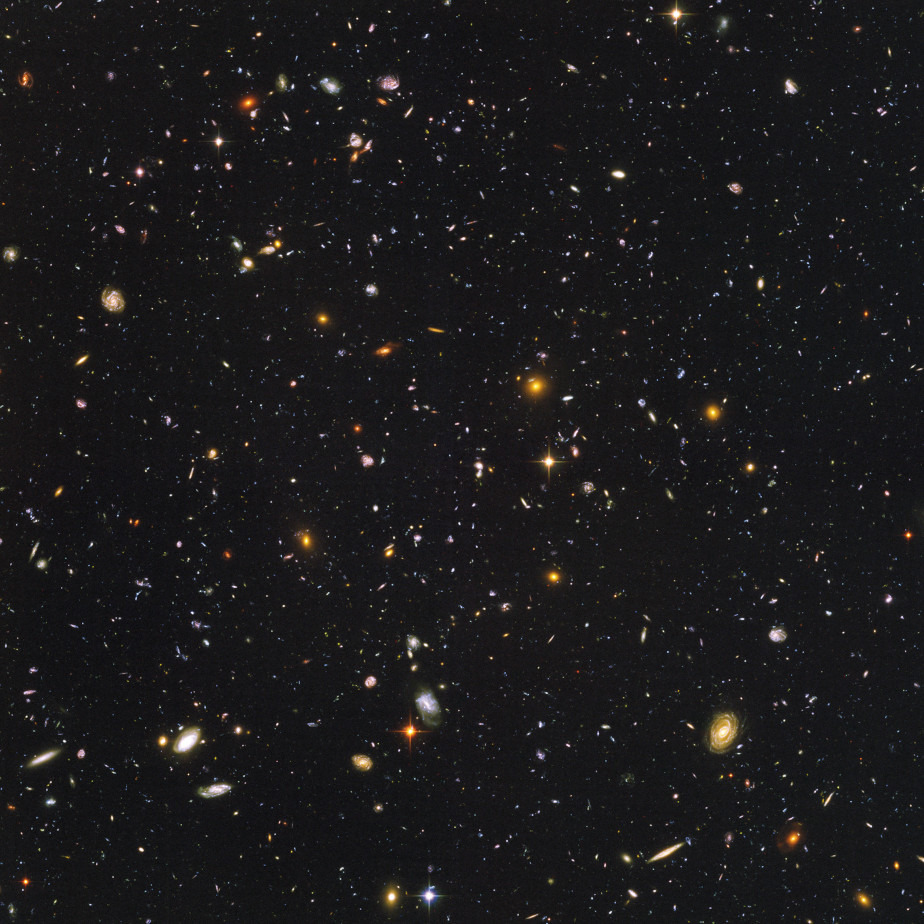 NASA, ESA
Gazing deep into the past